From coloradoriverscience.org
Jump to navigation Jump to search

The Colorado River Simulation System (CRSS) is one of two river system models developed and maintained by Reclamation to support operational decision-making and planning for the Colorado River Basin. All three models are implemented in the RiverWare modeling platform and share some key features. RiverWare is an object-oriented modeling platform in which the objects may be inflow points, river reaches, diversions, reservoirs, canals, pipelines, and other water-resource features.

CRSS is used for long-term (5-50 years) projections for planning studies, criteria development, and risk analyses, and is run in a probabilistic mode, meaning that a large set (30-1000+) of inflow scenarios, representing plausible hydrologic futures, are used to generate an ensemble of output traces for analysis. CRSS runs are currently performed on an as-needed basis to support specific analyses and studies. It was previously used operationally to provide 5-Year Probabilistic Projections, but in February 2022 Reclamation switched from using CRSS to using the Colorado River Mid-Range Modeling System (CRMMS) to provide these projections.

The latest version of CRSS reflects over 50 years of Reclamation computer simulations of the Colorado River system for long-term planning, dating back to 1969. The CRSS moniker was first attached to a FORTRAN model in the early 1980s, which was then implemented in RiverWare in 1996.

Multi-decadal CRSS projections of Lake Powell and Lake Mead levels and other system outcomes under different supply, demand, and policy assumptions have been fundamental to many important basin studies and policy documents over the past few decades, including the 2007 Interim Guidelines EIS, the 2012 Basin Study, Minutes 319 (2012) and 323 (2017), the 2018 Ten Tribes Tribal Water Study, and the 2019 Drought Contingency Plans. 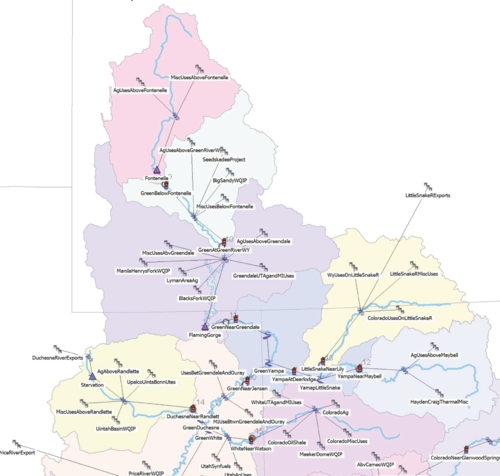 CRSS has both greater complexity, especially in representing water uses, and greater flexibility than CRMMS. CRMMS allows for variation in supply (inflow) assumptions, but has fixed demand assumptions and reservoir operating rules. CRSS allows for different supply, demand, and reservoir-operation assumptions to be specified, thus making it useful for policy analysis.

The representation of Reclamation's reservoir system in CRSS is very similar to CRMMS. There are 12 reservoirs; 9 in the Upper Basin and 3 in the Lower Basin:

The only differences from CRMMS are that Vallecito Reservoir in Colorado is not modeled separately in CRSS, while CRSS includes Starvation Reservoir in Utah, which is not separately modeled in CRMMS.

CRSS has 29 inflow points (Figure 2), more than CRMMS's 16 points in 24-Month Study mode and 19 points in Ensemble mode. More important than the number of the points is the nature of the inflows themselves. In CRMMS the inflows are forecasts of partly naturalized streamflows, which means that Upper Basin water demands are already "baked" into the inflows, while Lower Basin demands are represented by fixed schedules. In CRSS, however, the inflows are sequences of fully naturalized streamflows, which allows a much broader set of water demands in both the Upper and Lower Basins to be specified, and adjusted, in CRSS independently of the inflow scenarios. The CRSS inflow sequences are developed within Reclamation using one or more sources of hydrologic information: the historical observed hydrology, paleohydrology, and climate-model-projected future hydrology. 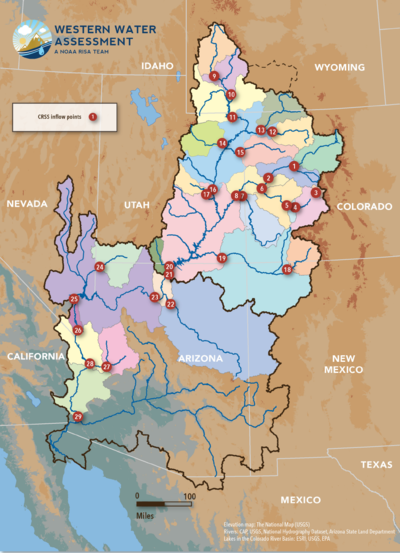 In total, CRSS represents 115 delivery points across the basin. In the Upper Basin, these delivery points typically represent aggregations of many water users. While there is flexibility to adjust diversions and depletions at each point, in practice the Upper Basin demands in CRSS have been set according to depletion schedules provided by the Upper Colorado River Commission (UCRC). In the Lower Basin, each mainstream water user is individually represented, with their water use set according to the current policy or alternate policy being analyzed (e.g., 2007 Interim Guidelines, 2019 Drought Contingency Plans).

The output from CRSS consists of monthly projected elevations and storage, releases downstream, and hydropower generation (if applicable) for the 12 modeled reservoirs, as well as consumptive uses. Given the length of the runs (usually 20-50 years), these outputs are usually summarized in time-series plots, from which results for specific time-slices are extracted (e.g., % of runs in 2050 that show Lake Mead below 1025').

Reclamation does not produce regular operational CRSS projections at long-term (>5-year) timescales. Instead, CRSS is run at longer timescales as needed for specific studies and policy analyses. Below are links to the studies (and report volumes therein) that drew on, and in some cases, presented CRSS results, in reverse chronological order:

Under the "CRSS" tab, this Reclamation page provides information about CRSS model setup and assumptions, the inflow scenarios, and the reservoir operating rules. The tabs marked "Overview", "Hydrology", "Policy", "Uncertainty", and "Modeling Assumptions" contain information germane to both CRSS and CRMMS.

State of the Science Report

Chapter 3 of the State of the Science report, Primary Planning Tools, describes the primary Reclamation system models in detail, although it uses the old nomenclature of "24-Month Study Model" and "MTOM" in lieu of CRMMS.

This 2019 white paper provides a detailed overview of CRSS and its operation, and then evaluates its utility in analyzing alternative management paradigms for the Colorado River. The report was authored by Kevin Wheeler, David Rosenberg, and Jack Schmidt, and produced by the Center for Colorado River Studies at Utah State University.