From coloradoriverscience.org
Jump to navigation Jump to search 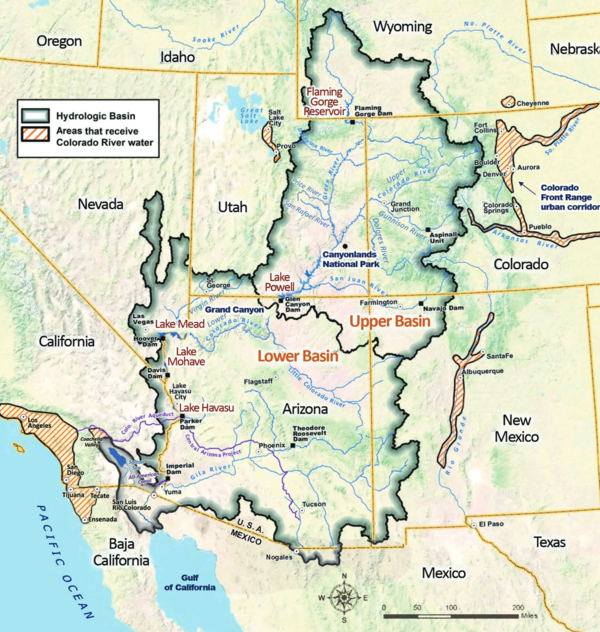 Figure 1. The Colorado River Basin, with major dams and reservoirs highlighted. The hatched areas show areas where municipal and/or agriculture use of Colorado River water occurs outside of the basin. (Image: Center for Colorado River Studies, Utah State University, adapted from Reclamation)

The Colorado River is a vital source of water, hydropower, recreation, ecosystem services, and other amenities for people in the seven basin states (Colorado, Wyoming, Utah, New Mexico, Arizona, Nevada, and California), over two dozen federally recognized tribes, and Mexico. About 75-80% of the river system's water use is in agriculture, supporting over 5 million acres of irrigated crops and pasture. Another 15-20% is municipal use; 40 million people rely in part or in full on the Colorado River and its tributaries for their water supply. Much of the agricultural use and most of the municipal use takes place outside of the physical basin, supplied through transbasin diversions (Figure 1). The hydropower facilities at the basin's major dams together generate over 10,000 megawatt-hours annually, enough to supply about 1 million households, when reservoirs are full. A 2014 study estimated the total economic activity across the seven basin states supported by Colorado River water to be $1.4 trillion annually.

Today's extensive human uses of the river are predicated on an equally extensive system of dams, reservoirs, diversion structures, canals, pump stations, and tunnels that was largely built between the 1930s and 1980s; the linchpins of the system are the enormous mainstem reservoirs Lake Powell and Lake Mead. The Bureau of Reclamation operates the major reservoirs, with many state and local entities helping to operate the system. In total, the reservoirs can store close to 60 million acre-feet (maf), equivalent to four years of the annual average natural flow from the Upper Basin during the 20th century (15 maf). The vast physical infrastructure controlling the river has developed in parallel with the complex legal and policy framework governing water allocation and operation of the system, known as the Law of the River.

In its natural state, the river was a muddy lifeline through a mainly arid region, distributing water, nutrients, and hundreds of millions of tons of sediment downstream and ultimately to the Gulf of California, creating an extensive and rich delta ecosystem. Dozens of endemic fish species were adapted to the relatively warm and turbid waters of the mainstem river and large tributaries. Riparian vegetation and associated species depended on periodic floods and resulting flushes of sediment. By heavily regulating streamflows from the mountain headwaters to the mouth, the combination of infrastructure and policy has massively changed the geomorphic and ecological functioning of the Colorado River. The imperilment of federally listed species by these changes and other human impacts has prompted long-term multi-agency conservation programs.

The challenges of the 21st century 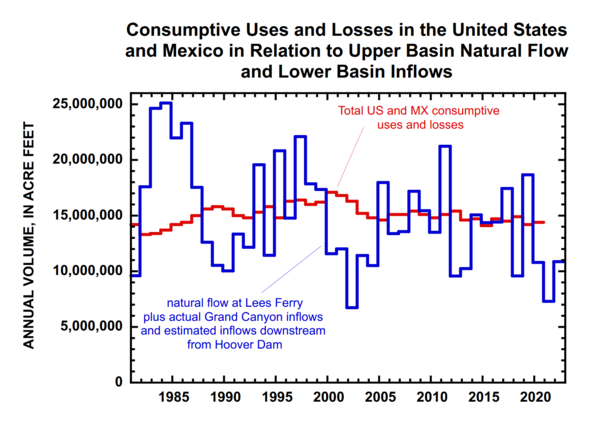 Figure 2. Estimated annual basinwide inflows (blue line) compared to the annual total consumptive uses and losses (red line) for the Colorado River Basin, 1981-2022. From 2000 to 2022, the inflows were lower than consumptive uses and losses in 15 of 23 years, leading to the reservoir drawdown shown in Figure 3. (Image: Jack Schmidt, Center for Colorado River Studies, Utah State University; data sources are detailed in the footnote at the bottom of this page.) 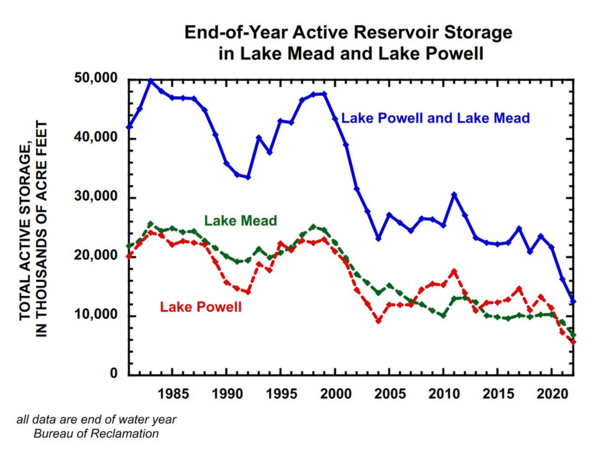 The total consumptive use of water from the Colorado River Basin increased by 50% between 1960 and 1990, to about 14 maf per year, due to rapid growth in southwestern cities, new agricultural diversion projects, and additional evaporation from new reservoirs, including Lake Powell. These annual depletions exceeded the inflows during a 5-year drought from 1988-1992 (Figure 2), leading to a significant drawdown of Lake Powell and Lake Mead (Figure 3), but very wet years later in the 1990s refilled the reservoirs. Starting in 2000, an extended dry period exacerbated by warming temperatures--now referred to as the early 21st-century megadrought--saw average annual streamflows that were about 20% lower (~12 million acre-feet) than the long-term average, driven by especially low flows in 2000-2004, 2012-2013, 2018, and 2020-2022.

During this period of chronically low inflows, full water deliveries to the Lower Basin states (California, Arizona, Nevada) and Mexico continued, while Upper Basin water use stayed relatively constant as well. As a result of the depletions exceeding inflows in most years, total system storage has declined to levels never seen except in modeled future scenarios (Figure 3). As of October 2022, Lake Powell is at 25% of capacity, uncomfortably close to the minimum level for producing any hydropower--and possibly for reliably delivering any water downstream. Lake Mead is at 28% of capacity, also close to its minimum power pool.

Under agreements made in 2007 and 2019 to forestall more severe system impacts, mandatory (Tier 1) curtailments of Lower Basin and Mexico water use were triggered for the first time in August 2021, followed by larger Tier 2 curtailments, totaling 0.7 million acre-feet per year, in 2022. These curtailments were deemed ineadequate to alleviate the tenuous state of the major reservoirs, and in June 2022 the Commissioner of Reclamation demanded that the seven basin states collectively reduce their annual water uses by an additional 2 to 4 million acre-feet in 2023.

This short-term crisis has come to the forefront as just as Reclamation, the basin states, tribes, Mexico, and other stakeholders are revisiting the 2007 Interim Guidelines for operating Powell and Mead and sharing water shortages, in preparation for developing and implementing new long-term guidelines by 2026. Based on discussions thus far, the new guidelines will need to incorporate lessons from the 21st century thus far, and accommodate the increasing influence of climate change on basin hydrology. Other complex challenges in the basin await further action, if not durable solutions, such as unresolved tribal water allocations and infrastructure needs, endangered fish and other species, and the shrinking Salton Sea.

Footnote on Figure 2: The data used to calculated natural available supply and consumptive uses and losses include annual average flow at gaging stations reported by the USGS, estimates of natural flow made by Reclamation (https://www.usbr.gov/lc/region/g4000/NaturalFlow/provisional.html), consumptive uses reported by Reclamation in reports applicable to the Upper Basin (https://www.usbr.gov/uc/DocLibrary/reports.html) or to the Lower Basin and Mexico (https://www.usbr.gov/lc/region/g4000/wtracct.html), and internal Reclamation spreadsheets that revise some published records (J. Prairie, written commun, 2022). Water is also “lost” as reservoir evaporation and in evapotranspiration by riparian vegetation. Reclamation estimates evaporative losses from all reservoirs (https://www.usbr.gov/uc/water/hydrodata/reservoir_data/site_map.html) and estimates evapotranspiration losses downstream from Hoover Dam (J. Prairie, written commun., 2022). Natural flow is the estimated river flow in the absence of any human activity. Data concerning calendar year annual consumptive uses and losses were added together to estimate the total basin-wide uses of water between 1981 and 2020, which is the most recent year that comprehensive data are available.